The largest inland delta in the world!

The Okavango Delta -  Truly the largest inland Delta in the world!

Described as "the river which never finds the sea", the Okavango River in northwestern Botswana disappears into a 6,000-square-mile maze of lagoons, channels, and islands. The Okavango Delta is a spectacular site either in flood or at other times of the year. Teeming with wildlife and over 400 bird species, a visit to Botswana's Delta is an experience of a lifetime.

The Okavango Delta in Botswana is the largest inland Delta in the world. It's made up of an intricate network of channels and lagoons, and one of Africa’s vast unspoilt and pristine wilderness areas teeming with wildlife.

The Okavango Delta is fascinating. In a country which is 80% arid, the Delta is a permanent life giving waterway. An essential understanding when planning your Okavango Safari is that it is a highly dynamic environment, which changes from year to year and even from month to month. 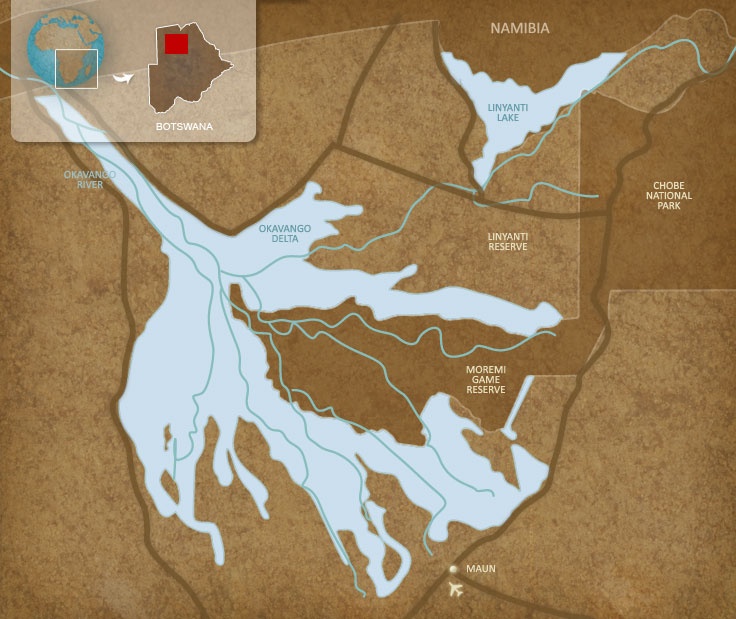 Rising in the Angolan Highlands, the Okavango River enters Botswana below Namibia's Caprivi region. Here, in the so called 'pan-handle,' it is still a wide, fairly swift, flowing river, but due to the overwhelmingly flat landscape and a series of geological faults, it soon starts to meander forming graffiti-like bends that wind sinuously through dense beds of Papyrus. Below the pan-handle, the Okavango River splits into three main channels, each one carrying water in a different direction. The headwaters of each of these channels are situated in the permanent swamp (water based camps), but further along their course, each penetrates into what is known as the 'seasonal swamp' (land and combination camps). 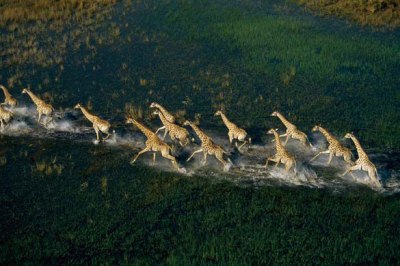 Life in the Delta ecosystem is governed by two events:

The summer rains and the winter floods. Summer rainfall fills seasonal pans and helps keep the channels full, but towards the end of summer the waters recede, only to rise again when the floodwaters from the Angolan Highlands eventually reach the lower delta. The Okavango Delta fluctuates in size according to a complex relationship between the annual flood from Angola and local rainfall. Not all the 13 000km² is flooded and at the driest time of the year, perennial flood plains amount to only 6 000km².

Moremi Game Reserve is the only section of the Okavango Delta that has been cordoned off for wildlife. The Moremi Game reserve is safari country par excellence and rivals even Chobe. Lying on the central and eastern side of the Delta, Moremi is a mix of both aquatic and terrestrial landscapes, the latter of which is comprised of savannas and riparian woodland. 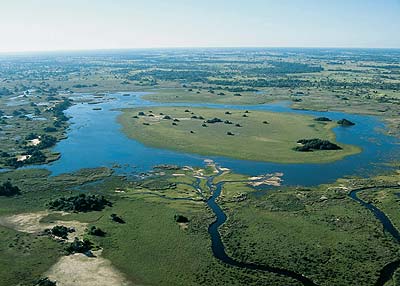 Stay in comfort and style at one of the many Camps and Lodges in the Okavango. Reminisce fireside about your day's game viewing by mokoro (dug out canoe), boat or Land Rover. Wake to the loud grumbling of an elephant's tummy and lie silent and still in your luxury tent while it grazes only a stone's throw away. Experience a sunset unlike any other, as the sun dips on another day on safari in the Okavango Delta. The Delta is home to some of the most exclusive luxury camps in Botswana - and all of Africa for that matter!

We have included all the lodges below, ordered by our own grading system, as well as by price. Please also see the section listed as Camps and Lodges:- Botswana

Please click on the images for detailed camp information

We only actively support those safari camps and lodges that (to our knowledge) contribute directly to community upliftment and which apply good principles of sustainable eco-tourism.

(Rural populations, across socio - economic lines, MUST be incorporated into the flow of benefits (both financial and otherwise) accruing from the tourism and wildlife industry).