The Wildebeest and Zebra Migration (Kenya and Tanzania)

Truly a spectacle one has to experience at least once in a lifetime!

There is no real beginning or end to a wildebeest's journey. Its life is an endless pilgrimage!

From the vast Serengeti plains to the champagne colored hills of Kenya's Masai Mara over 1.4 million wildebeest and 200,000 zebra and gazelle, relentlessly tracked by Africa's great predators, migrate in a clockwise fashion over 1,800 miles each year in search of rain ripened grass.

There is no real beginning or end to a wildebeest's journey. Its life is an endless pilgrimage, a constant search for food and water. The only beginning is at the moment of birth. An estimated 400,000 wildebeest calves are born during a six week period early each year - usually between late January and mid-March. 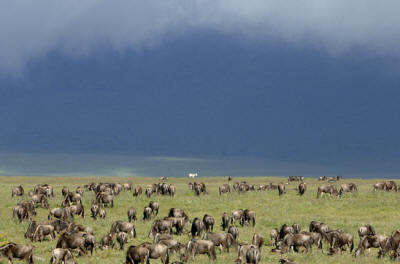 The Serengeti National Park / Ngorongoro Conservation Area is arguably the most impressive wildlife sanctuary in the world. During the months December through March the seemingly unending plains of the southern Serengeti and the Conservation Area are inhabited by enormous herds of wildebeest and zebra. The great herds graze on rain ripened grass.

In the calving season (late January through mid March) the herds concentrate at the Ndutu and Salei plains (Southern Serengeti / Ngorongoro Conservation Area) attracting the attention of predators like lion, cheetah and hyena.

During this period the migration is best observed from Ndutu Safari Lodge, Kusini Camp or any of several private tented camps used by mobile safaris such as our "Wildlife Adventure by 4x4 Safari". These include campsites in the Ndutu / Naabi area. 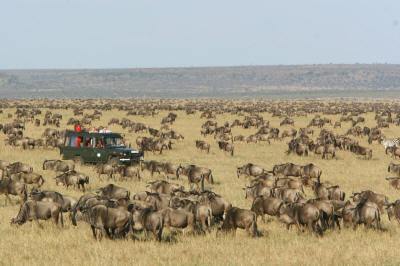 During the months April and May the depleted plains are unable to sustain the endless herds. The migration, sweeping west and north, moves from the short grass plains of the southern Serengeti / Ngorongoro Conservation Area to the long grass plains and woodland of the Serengeti's western Corridor, almost to Lake Victoria. This period is during the long rains and is considered off season for wildlife viewing in East Africa as roads are often impassable. Ndutu Safari Lodge, Kusini Camp and the Serengeti Serena Lodge are fine for wildlife viewing during this time. So are campsites in the Ndutu / Naabi area.

By the end of May the wildebeest have exhausted the Western Corridor's best pastures and the herds must move further north. Entering the Lamai Wedge and the Mara Triangle, breeding occurs May through June. This is a transitional period between the rains and the dry season. Grumeti River Camp, Migration Camp and Kirawira Camp are also options. Seronera and Moru area campsites are best. 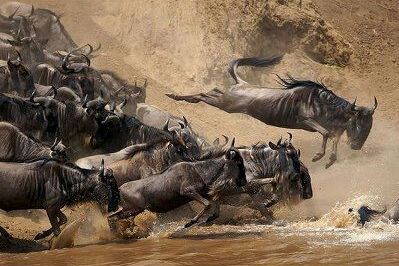 By July the countless herds have amassed along the swollen Mara River - a final barrier from the short sweet grasses of the Masai Mara. Sometimes the crossing place they have chosen is shallow allowing the majority of animals to pass safely. In other areas the waters boil with drowning wildebeest and slashing crocodiles.

Between July and October the wildebeest reside in the Mara. We recommend Governor's Il Moran Tented Camp as the leading safari camp in the Masai Mara. Other tented camps include Governor's Main Camp, Little Governor's Camp and Bateleur Camp. Tanzanian lodges recommended during this time include Kirawira Tented, Migration Camp, and Grumeti River Camp. Kirawira and Moru area campsites are best. 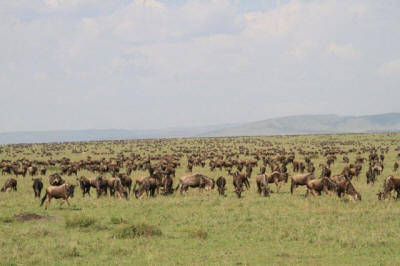 The arrival of the short rains call the migration southward. During the short rains of November the wildebeest migration is best viewed from either Lobo Wildlife Lodge or Klein's Camp. Campsites in the Lobo area are best.

As November ends the migration is making its way back to the southern Serengeti and early in the year they once again give birth. The circle of life is complete.

Note - The migration is a natural event and the timing varies month by month; year by year, further determined by rainfall patterns…